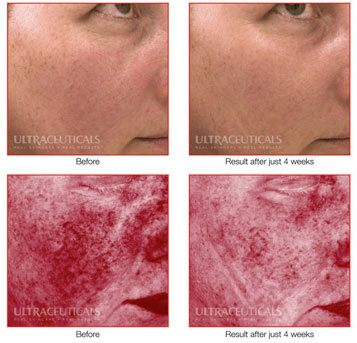 What Causes Redness in Face?

Did you know that 7 out of 10 people suffer from redness in face and blotchy skin tone as a result of photoageing?
Facial redness is most commonly caused by photoageing and occurs in two ways:

1. Over time, the skin’s dermal matrix (containing collagen, elastin and hyaluronic acid) is broken down as a result of photodamage, subsequently thinning the skin and causing underlying blood vessels (capillaries) in the dermal matrix to become more visible, therefore giving an increased appearance of skin redness.

2. As a natural wound healing response to photodamage, the growth factor VEGF (Vascular Endothelial Growth Factor) is produced in response to UV light entering the skin and creating free radicals. This growth factor stimulates the production of new blood vessels. New and existing blood vessels become contorted and enlarged and this causes an increase in surface redness (angiogenesis).

This powerful serum contains Ultraceuticals unique Anti-RED Complex (Kinetin, Andrographolide and Niacinamide), a truly innovative formula that has been clinically tested to reduce the visible signs of facial redness.

Kinetin is found naturally in plants. It is a growth factor that prevents plant leaves from drying out and withering. Kinetin has been clinically tested to reduce the appearance of surface capillaries and improve the visible symptoms of mild to advanced facial redness and rosacea.

Andrographolideis derived from the medicinal plant Andrographispaniculata and has been used centuries in Asian medicines. Recent studies have shown that it has antioxidant and potent anti-irritant properties. In research published in various medical journals, Andrographispaniculata was demonstrated to have inhibitory activity on the level of Vascular Endothelial Growth Factor (VEGF) in the skin.

Niacinamide is a vitamin which has demonstrated anti-irritant benefits. Studies have shown that Niacinamide can decrease the visible signs of photoageing, including decreasing skin surface hyperpigmentation, reducing fine lines and wrinkles, decreasing sallowness and redness / blotchiness. It has been shown to improve skin elasticity and support the skin’s lipid barrier function. Kinetin and Niacinamide have also been shown to work synergistically to have an anti-ageing effect of the skin, including reducing redness.

NB: Ask about combining Red Action Complex with IPL Vascular Treatments in Salon to ensure the fastest, most effective results.